We are excited to celebrate this #TwirlerTuesday with our first Collegiate Twirler Spotlight of 2021. This past season looked quite different for many of our twirlers, but for some it is even more unusual as their season was moved to the Spring. Regardless, it is amazing to see twirlers on a football field any time of year, and we really enjoyed following these two ladies as they took over our Instagram story during their April 25th game.
Today’s Collegiate Twirler Spotlight is the Tyler Junior College Feature Twirlers! 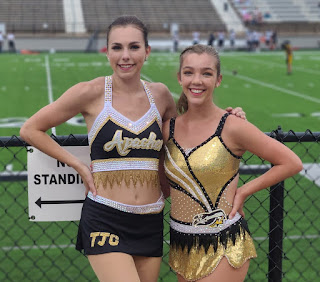 TJC is located in Tyler, Texas, and is the home of the Apaches, as well as these two awesome Feature Twirlers! Ally Wilcox and Katelynn Carter were named the TJC Feature for Fall 2021, and could not have been more excited about the chance to share the field together.
Making the choice to attend a Junior College has been beneficial for both twirlers. Ally told us it has been a great stepping stone for her. “I’m still fairly close to home, but also living on campus. While it is large for a junior college, I don’t feel as overwhelmed here as I would at a University. It also was financially the best choice for me since I’m still undecided as to which career path l want to take.” For Katelynn, it also made the most sense financially. “I was awarded a full academic scholarship with Presidential Honors, as well as a generous scholarship from the Apache Band to perform as a Feature Twirler including having my costumes paid for. Essentially I have not had any out of pocket expenses so far to complete my general students and start classes directed toward my major.”
As many twirlers are trying to decide what route to take out of High School, we asked them what advice they would give to twirlers thinking about attending a Junior College like TJC. Katelynn told us she definitely recommends it. “It is a great way to figure out exactly what you want to do in the future and experience field twirling with a college band. It has opened doors for me to learn and grow academically and in twirling before entering a University.” Ally gave practical advice in terms of knowing what you are signing up for. “I would say to make sure that whatever Universities you have in mind are willing to accept transfer credits from the chosen Junior college.”

While having Football in the spring has been a little strange, it was great for them to have the chance to be on the field, even if it was only for two games. They told us TJC has had many COVID precautions in place throughout the year including mask usage, the option of online or in person classes, and limited numbers in the stadium for games. Sadly, this has also included cancelling many of the normal school activities and traditions, but they look forward to experiencing those things next year.
We did want to know what the hardest part for them has been dealing with this COVID season. Ally told us she missed performing. “I think the most difficult thing for me was to go as long as I did without performing. We did not get any live performances during the fall, but thankfully we have gotten to have some football games this semester.” Katelynn said the hardest part is learning to twirl with a new accessory – a mask! “I have asthma and it gets hard to breathe through cloth or paper when you are exerting a lot of energy.”
Now that we have learned a little more about why they chose TJC, and how they are making the best of the weirdest twirling year yet, let’s learn more about these awesome twirlers! 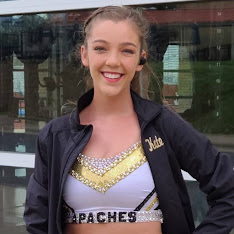 Katelynn Carter
Competition Level: Collegiate
Katelynn is a sophomore from Tyler, Texas, that is majoring in education. She has been twirling for nine years and is coached by Beth Maddox. At TJC, Katelynn is also a member of the English Honor Society, Presidential Honors Program, Phi Theta Kappa, and Sigma Kappa Delta. The competition title she is the proudest of earning was the 2020 Southwest Regional Beginner Senior Pageant Winner. Her favorite competition tricks are slap catches and rolls, and her favorite field trick is a flash aerial or toss aerial. In baton twirling she has been most inspired by so many amazing twirlers that it is hard to name just one. After she graduates from TJC she plans to teach 7th or 8th grade English while finishing a master’s degree in psychology, and then diving into the political side of Education. “I want to make a change in our education system.” 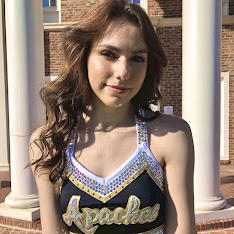 Allyson Wilcox
Competition Level: Intermediate
Ally is a freshman from Bullard, Texas, that is majoring in General Studies. She has been twirling for six years and is coached by Beth Maddox. At TJC, Ally is also a member of Phi Theta Kappa, Sigma Kappa Delta, and the Presidential Honors Program. The competition title she is the proudest of earning was the 2019 Beginner Senior Miss Majorette of the Woodlands. Her favorite competition trick is a toss illusion, and her favorite field trick is doing her toss leap somersault down the field during pre-game. “It is really fun!” In baton twirling she has been most inspired by former TJC Feature Twirlers, Beth Maddox and Paige Patillo. Right now Ally is in General Studies to determine what the best course of study is for her, and hopes to one day have her education help her in pursing a successful career.
Fun Facts!
Favorite Color – Blue (Ally & Katelynn)
Favorite Movie – “Pride and Prejudice” (Ally), Harry Potter (Katelynn)
Favorite Music – “Anything Taylor Swift” (Ally), Rock N Roll (Katelynn)
When they are not twirling they love to…
Ally – “Read, write, and hang out with my friends.”
Katelynn – “Write poetry and read.”
Something people might not know about them is…
Ally – “I really like sunflowers.”
Katelynn – “I have had poetry published.”
Favorite Quote…
Ally – “And walk in love, as Christ loved us and gave Himself up for us." ~ Ephesians 5:2
Katelynn – “Start by doing what is necessary, then do what is possible, and suddenly you are doing the impossible.” ~ Saint Francis of Assisi
Most memorable advice from their coach…
Ally – “Remember that God gave you your talent, so be sure to do what you are doing for His glory.” – Colossians 3:23
Katelynn – “’Close your hand!’ Beth says this to me A LOT!”
Favorite Moment as a baton twirler...
Ally – “I don’t think I can choose just one, but I cherish every performance and that feeling I get as I hit my ending pose.”
Katelynn – “Completing my first toss aerial!”

Best School Tradition...
Ally – "Pre Game."
Katelynn – “With COVID and all the restrictions it has brought with it, I have not been able to fully experience enough of the big traditions to have a favorite yet.”
Best Band Tradition/Inside Joke...
Ally – “Lets have a great day!”
Katelynn – “The Rim March. Before pre game, the band and color guard march around the rim of the football stadium.”
Funniest Twirler Moment…
Ally – “Probably when I was learning to do a somersault and my coach said I looked like an ostrich.”
Katelynn – “When I accidentally hit my mom with my baton and she posted it on Facebook. The entire TJC band knew about it. Mr. Strickland made a joke about it at band practice the next day!”
What is the best life skill you have learned from baton twirling....
Ally – “Once something has already happened (like a drop or a bad performance), there isn’t much you can do about it other than to handle it as gracefully as possible and learn from it.”
Katelynn – “Confidence, and the ability to believe in myself and know that I can do it!”
Advice to future Collegiate Twirlers...
Ally – “Have different schools in mind, keep track of the different things that each school is looking for in their twirlers, and choose the college that feels like the best overall fit for you.”
Katelynn – “Never give up! Remember that failing is the first step in improving.”

We want to thank Katelynn and Ally for sharing their Game Day with us and taking the time to be our Collegiate Twirler Spotlight this week. It was so great getting to know a little more about these two talented twirlers, and we look forward to seeing them back on the field this Fall!

We hope you have enjoyed this blog post. We are always looking for great new stories about Texas twirlers. Do you have an idea or some information we could use to help highlight our sport? Contact us at texastwirlcontact@gmail.com and we would love to hear more about it.
Posted by Twirling is Catching - TX Edition at 2:48 PM

Twirling is Catching - TX Edition
This blog was created to help promote the spirit of NBTA Baton Twirling in Texas by sharing news, pictures, and announcements about Texas twirlers.

If you have an item you would like to submit, please email the blog admin at texastwirlcontact@gmail.com.